An interview with the Dutch animation artist Anna Eijsbouts. Last year, her film »Hate For Sale« won the Audience Award at the Weimar Poetry Film Festival and the ZEBRA Award for Tolerance. Anna tells us about how she became an animation director and gives us an insight into the making of her poetry film.

Aline Helmcke: Your animated short film »Hate For Sale« investigates what makes hate so tempting to the human kind. This film seems very relevant in a time where we have to deal with the fact that hatred is growing to a frightening extent in our society. Was there a specific incident or personal event that made you choose this topic for your film?

Anna Eijsbouts: Well, it just felt like the world as a whole was going down a spiral: Trump, the refugee crisis, women’s rights being questioned and taken away worldwide, democracy being tainted by extremely subjective news sources. As an artist I have a voice and in the words of Nina Simone a duty, so I knew that the film I was about to make would touch on these things.

How did you find out about the Visible Poetry Project? Can you tell us how it works?

Actually they found out about me through my earlier film »Tired of Swimming« and asked me if I was interested in working on one of the films for April 2017. It was their first year and there was a lot of ambition (there still is, I think) to really make something happen. They select filmmakers and writers and connected the two, although in my case it went a little differently. As animation takes a very long time and I was teaching nearly full time as well, I knew that it was going to have to be something I cared about deeply and didn’t want to risk working on something I wasn’t fully behind. I asked them if they’d be okay with me asking Neil Gaiman to join in and they were more than okay with that.

How did you come across Neil Gaiman’s poem?

When I was approached by the Visible Poetry Project I asked Neil Gaiman (who has become a friend after we met at a film festival years ago) if he had anything poetic and political which he could imagine animated. We discussed my current worries in the world (which was a long list) and he wrote his incredibly powerful and poignant poem for the film.

Did you know about the genre of poetry film before?

Animation as a technique so very often hinges on poetry film that coming from there I never consciously separated the two. In live action they seem to separate more naturally. However, knowing about it now and having had the pleasure of seeing (and curating) programs with the genre in mind, it’s beautiful to be keenly aware of how complimentary the writing and imagery can be!

What makes the text so interesting for you?

The most obvious aspect for me to turn it into an animated film was that it was written precisely for that purpose. But well beyond that, it’s very interesting to work with such a strong emotion as the theme of a film. It challenged me to work in a technique which I’d only done short tests with up to that point: the paper cut-out shapes are perfect for the ways an emotion can morph, alter perception, change facts and find its way into the people it infects. 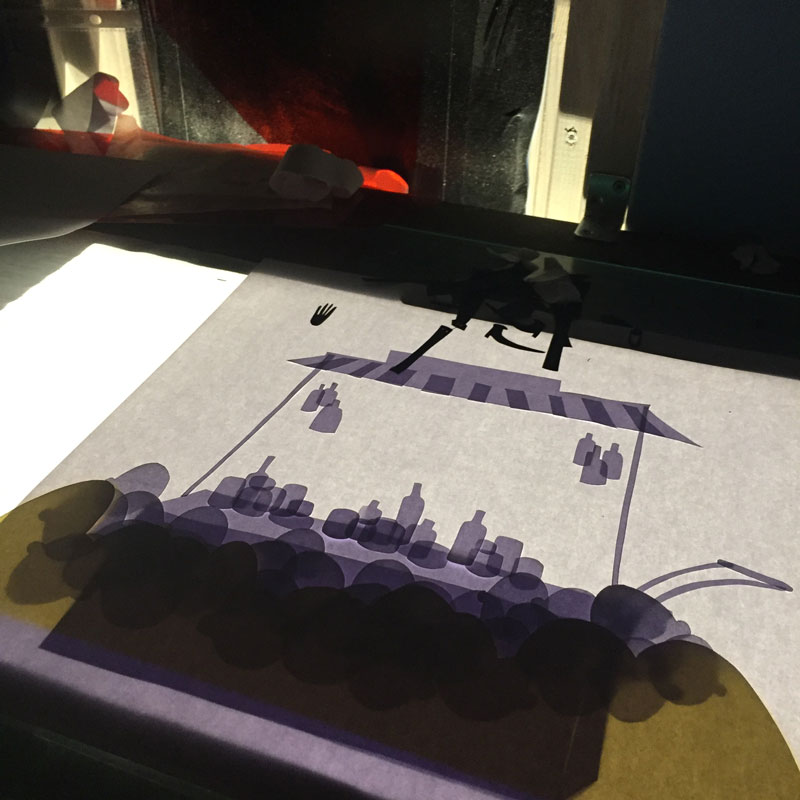 Have you been in touch with Neil while you did the film?

Not very much. He was incredibly busy working on Good Omens at the time and also my deadline was so tight I became somewhat of a recluse myself.

Apart from the poem itself, did you involve him in the processs of making in any way?

What was his reaction when he saw the film?

His initial tweet-response was »I watched it and was floored.« We’ve talked about it since and I’m pretty certain he’s very happy with how it’s turned out.

What gave you the idea to introduce the figure of the conferencier?

Well, the poem did. It’s very clearly the voice of someone selling something. There are these characters in films I’ve always found incredibly attractive, the antagonists you secretly or not so secretly love. That’s who he was to me. He was Joel Grey in Cabaret and Bowie in Labyrinth, the most alluring kind of propaganda … When I found Peter Kenny who did the brilliant voice acting, the image was complete.

How much planning, how much improvisation went into making the film?

The deadline was incredibly tight. I would like to say I very professionally planned out every shot to the tiniest detail, but it came down to really knowing a few key shots (like the hand bringing in the refugees which are then turned into the sea) and barely thumbnailing, if that, a great many more. It felt closer to improvisation in music or dance than it did to the filmmaking I’d experienced up to that point. Paper was perfect for that as a material as it’s relatively easy to quickly make whatever you might need, but more importantly the poem provided a very safe structure to take this freedom from.

You found a very charismatic voice actor for the voice-over. How did you get Peter Kenny involved?

That was such a lucky shot! I’d posted a few lines of the poem onto a voice actor casting website. I’d listened to about sixty men trying to sell me hate as though they were selling the latest volvo (despite notes about Joel Grey and Bowie and the androgynous tone of the character) and I was about to get quite desperate. Then I heard Peter’s voice, who’d been touched by the message of the poem from the get go, and it was so instantly perfect and obvious. I can’t imagine the film with anyone else performing this poem! 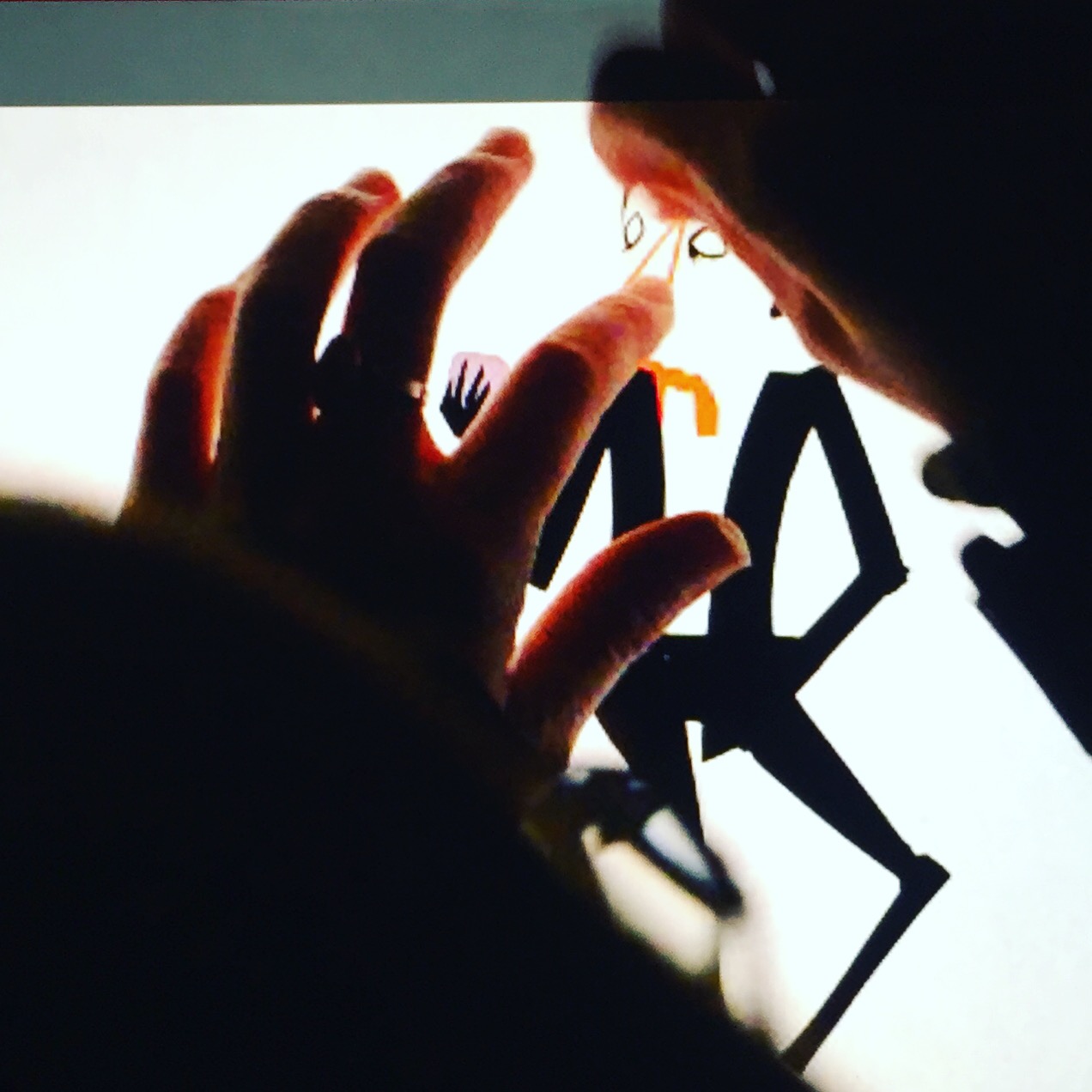 The quality of the light, the colours and the texture of the animated imagery really draws the viewer in. It reminds me a bit of the analogue cut out animation films by Lotte Reiniger. Can you lead us behind the scenes for a moment and describe the process of how you prepare the figures and animate them?

Thank you! It was actually a fairly similar process. Paper has a beautiful textural quality to it when lit from behind, which is something I’d come across a couple of years earlier in a test but had never quite been able to use in something longer. The black paper of course becomes a silhouette and then the red, blue and yellow plastic sheets allow texture to shine through but have none of their own. The red and black came from the design of early Soviet propaganda, the blue was an obvious addition for the sea and refugees and yellow completed the sense of primary colours.

The way the characters were prepared was very simply cutting out all of the parts of their bodies that needed to move separately, the animation was done on a glass plate covered by paper, moving all these tiny bits frame by frame. It’s all very straightforward, analogue and simple. The most complicated bit was the sea-part, which was layered in a different way to create a sense of depth, but even that was all in camera on one plane.

The haptic qualities of material seem to play a major role in your work, as you are working with cut out animation as well as stop motion techniques. What makes analogue animation so interesting for you?

It’s all about textures and materials. Each brings so much to a character or a shot before you’ve even started to animate it, it’s a deeper layer to its life. Also I love making things, touching things, moving things and feeling things. I get none of this from a computer screen. Working in an analogue way just works in line with my intuition.

I can imagine that it is not easy to take the time to work on a personal project. How did you manage?

I’d come to a point where I’d been teaching nearly full time for about three years and as much as I loved it, I was screaming inside. So when the Visible Poetry Project proposed a project without a budget, but with a deadline and a very loose brief, I decided that that would be more important than sleep and friends for a couple of months. And it was. 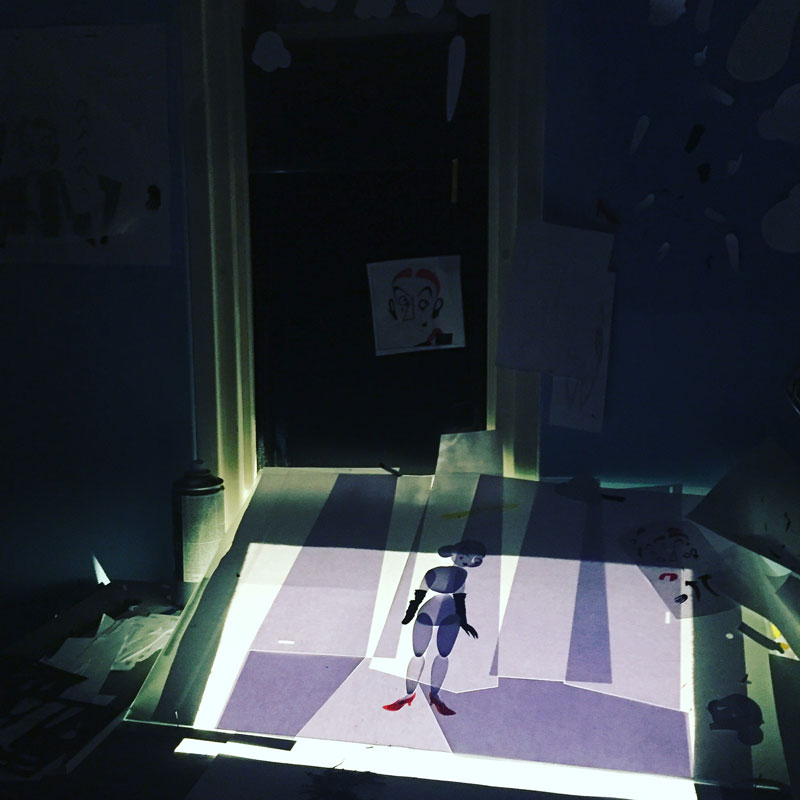 Why did you decide to become an animator?

I was studying fine arts and I was miserable. I’d been into music and writing and was in a sort of children’s circus as a kid. The kind of art I was making was printmaking based. I still love it, but it just felt static and dead to me at the time. Then I came across Tim Burton’s Vincent on The Nightmare Before Christmas DVD and figured I’d see if I could make one of those films. Life turned upside down and I was happy and one of my teachers suggested I joined the animation course in this other city one day a week. Three weeks after that I’d applied, gotten in and never looked back. It was suddenly so very clear.

What do you personally think is the difference between an animated poetry film and any other animated short?

Like I said earlier, I think animation and poetry can be incredibly closely linked. To me it feels like the natural state of animation which is often forced into this live-action-film-language straight-jacket by the more commercial side of the industry. Animation invites expression in a similar way to poetry, and watching it invites empathy and emotional experiences, similarly to reading poetry. The further away you get from money, the more poetic animation often gets.

On what project are you working on right now?

I’m currently developing a new short film. It’s a tricky one, but has been heavily influenced by poetry and music, more so than by any other art form.

What are your future plans? Would you work on a poetry film again? 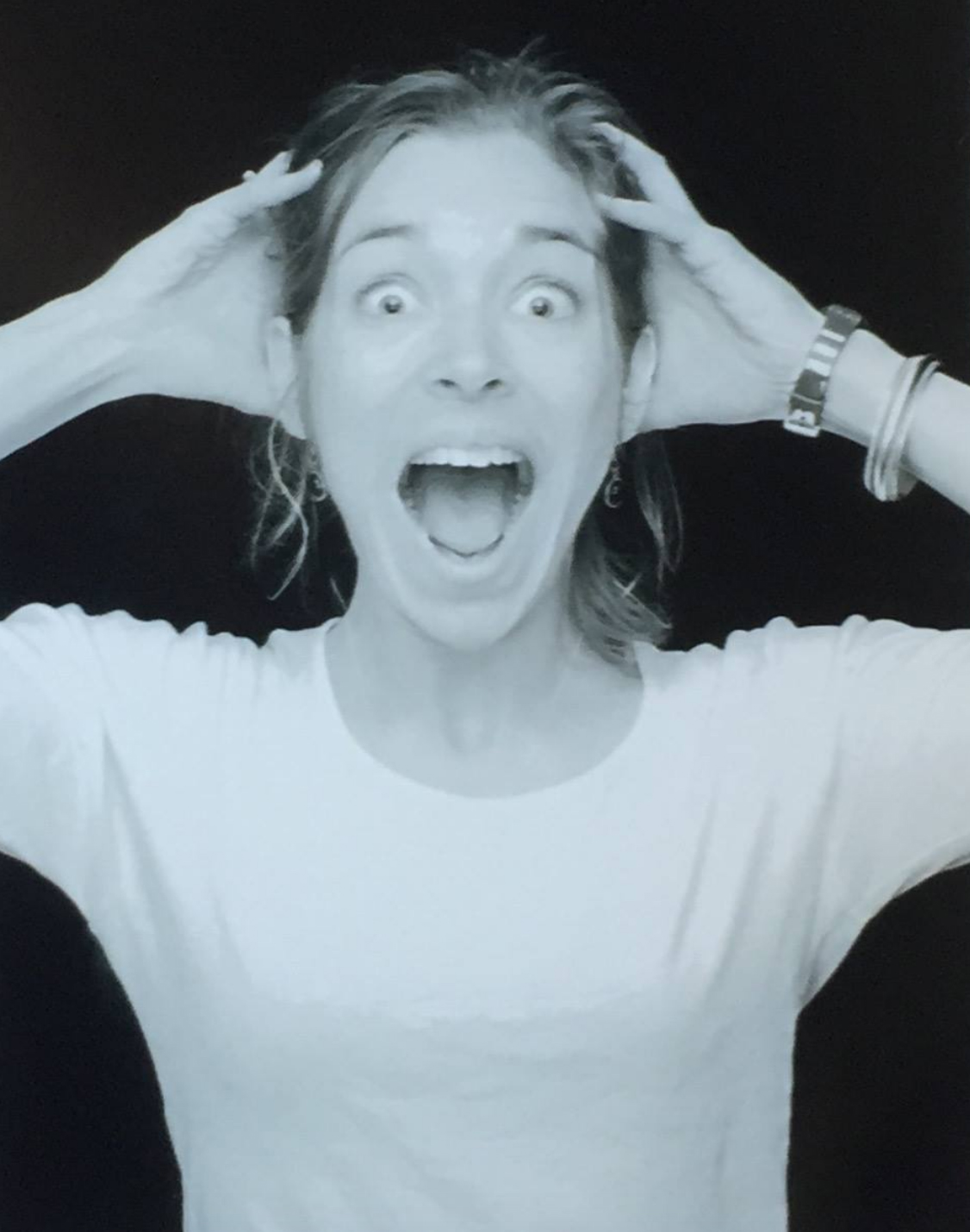 Anna Eijsbouts is an award winning Dutch animation director and animator specialising in puppet and cut-out stop-motion animation. ​She is also a lecturer at the Utrecht School of the Arts in Animation and Illustration.

She works best when she discovers a character with a story to latch on to and stalk for a while. This leads to animations driven by intimate character-fascinations in both her short films and her commercial work.

Anna graduated with an MA in Animation from the Royal College of Art in 2012 after completing a BA in Animation at the Utrecht School of the Arts in 2010.